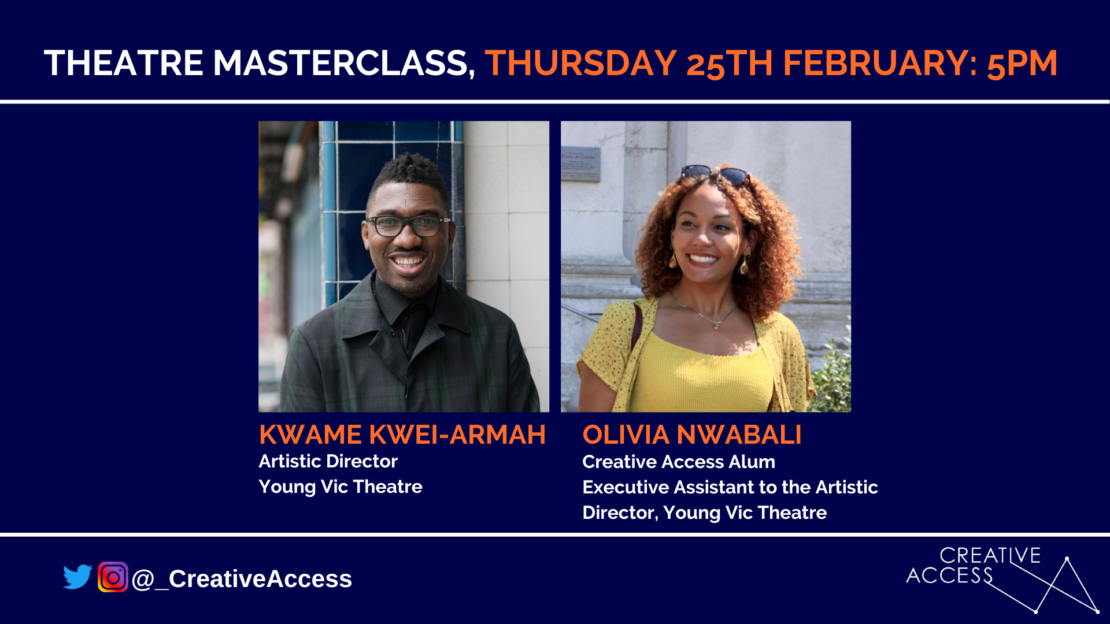 In the week where it was announced that theatres in England might reopen by mid-May, we were delighted to have our minds opened in a Theatre Masterclass during which Kwame Kwei-Armah, the Artistic Director of the Young Vic Theatre, joined Creative Access alumna Olivia Nwabali for an engrossing evening of conversation that flitted effortlessly between the practical and philosophical.

Olivia, who was previously a Creative Access trainee at the Barbican, is now Kwame’s Executive Assistant and the “better half of my brain” according to the man himself. She skilfully guided the discussion through topics as diverse as the Black Plays Archive that Kwame established, the value of networking within the industry, and the very future of theatre.

“Your voice is everything”

It was a discussion where Kwame’s experience of carving out a successful career in the creative arts was the central theme. Kwame spoke about his own ascent, and attributed his innate “restless curiosity” and boredom of waiting for opportunities as key drivers that propelled him from becoming an actor to a writer, then to a director, to now being the artistic director of a major arts organisation.

“I didn’t do all those things just so that I could get into an institution; I did all of those other things therefore part of my journey is running an institution” he relayed.

In 2005, Kwame became the first British Afro-Caribbean playwright to have a play produced in London’s West End. Since then, his illustrious career has taken him all over the world, from Baltimore to Senegal (which he cited as his greatest career achievement) and back to his home city of London. He was appointed as Artistic Director of the Young Vic in 2018.

A captivated audience of Creative Access community members listened as he gave clear and nuanced advice to those interested in playwrighting, advising them to make sure they find their voice:

“There may be a million reasons beyond your control why your writing might not get produced. Don’t let your writing be one of them.”

He urged aspirants to be on top of their artistry using the tools that they have at that moment in time.

“It doesn’t mean that you have to be technically brilliant; the tool that you need to have honed is your voice. What is it that you are saying that is unique to you? In your specificity, other people see their story. Your voice is your everything,” he explained. He then shared his own insights into finding the right agent for your voice, or the right theatre for your writing.

A theme that reverberated throughout the hour-long discussion was that of connections, networks, and creative ‘family’.

“When I first started in this industry networking was really daunting to me, probably because I am naturally quite shy, and possibly because I knew nothing of the industry,” Olivia confessed. “It was all very opaque to me before I had my internship with Creative Access.”

Kwame also spoke about his own natural aversion to networking in his early career. On reflection, he admits that by not networking he failed himself. He realised that he was seeing other people who he deemed were no more talented than himself move higher and faster through the industry because they had nurtured relationships and had won advocates. He urged people not to succumb to imposter syndrome and not to necessarily see it as ‘networking’, but more as simply putting yourself in environments where you can build connections, make friends, and find your creative family – a tribe of peers who you trust and who don’t define their relationship with you by how well you are doing at that particular time. Olivia echoed that it was important too. She added:

“Find your people and nurture those connections”.

Despite flourishing under Kwame’s leadership, Olivia expressed an awareness that getting into the industry is one thing, but sustaining yourself once in is another thing entirely.

“Simply being in a space does not account for the walloping that structural inequality can give you,” she warned. She mused about juggling both the weight of expectation placed on you as an outsider or minority who has made it in, and the limitations placed on you for those very same reasons.

Despite these challenges, it was clear to all that Kwame knows and feels he is doing what he was called to do. The fulfilment derived from being able to make a living out of one’s imagination is both a privilege and an untameable urge.

“I adore the act of serving a community through art,” he said. “Who wouldn’t want to be an artist and sit in this world where you’re continually being refreshed by other people’s philosophy and their take on the world?” This was echoed by Olivia who concluded that the imagination is one of the most radical tools we have at our disposal.

The future of theatre, and Kwame’s legacy

Kwame was palpably excited about the future of theatre, asserting categorically that “theatre will never die”. Despite feeling like “we’re in the middle of a vortex” at present, Kwame spoke of his excitement about what a return to theatre could mean, and how theatreland’s digital innovations of the last year might transform the way theatre is experienced in physical spaces for years to come, to create 4-D theatrical experiences from the 3-D pre-COVID theatre experience and the 2-D theatre we’ve seen this year through screens.

Speaking of theatre’s need to decolonise the canon, he stressed that decolonisation did not mean the destruction and erasure of old classics. It merely meant augmenting and widening what is written and produced, seeking stories and ideas from a wider range of experiences and backgrounds. He asserted that if what appears on stage starts to change, then who appears behind the scenes, and what gets taught in performing arts academies will also start to change.

For those seeking to enter the industry, he believed that it is incumbent on them to be innovative and deliberate about putting the spotlight on themselves, citing some TikTok users’ enviable ability to demonstrate incredible amounts of talent through just a few seconds of video.

He suggested asking yourself these four questions, when trying to enter the spotlight:

He started and ended with praise for Creative Access and Olivia.

“I want to big up Creative Access. Olivia’s been working alongside me for two and a half years. If she’s a poster child for Creative Access, then you can get no better! She’s a fantastic contributor to all that we do at the Young Vic.”

Olivia expressed an interest in the process of writing being brought to life, and a nascent interest in dramaturgy. Whatever she puts her mind to, we have no doubt that she’ll succeed. As for Kwame, he sees himself creating opportunities to open doors and create space for other creatives to fulfil their potential and use their art for good.

We are very grateful to Kwame and Olivia for sharing their experiences with us, and wish them well as theatres prepare to reopen to their doors later in the year. If you are interested in a career in theatre, don’t forget to check out our current theatre opportunities. We also thank all those who attended and contributed to the discussion by asking questions to the pair.

You can watch the full Masterclass here.