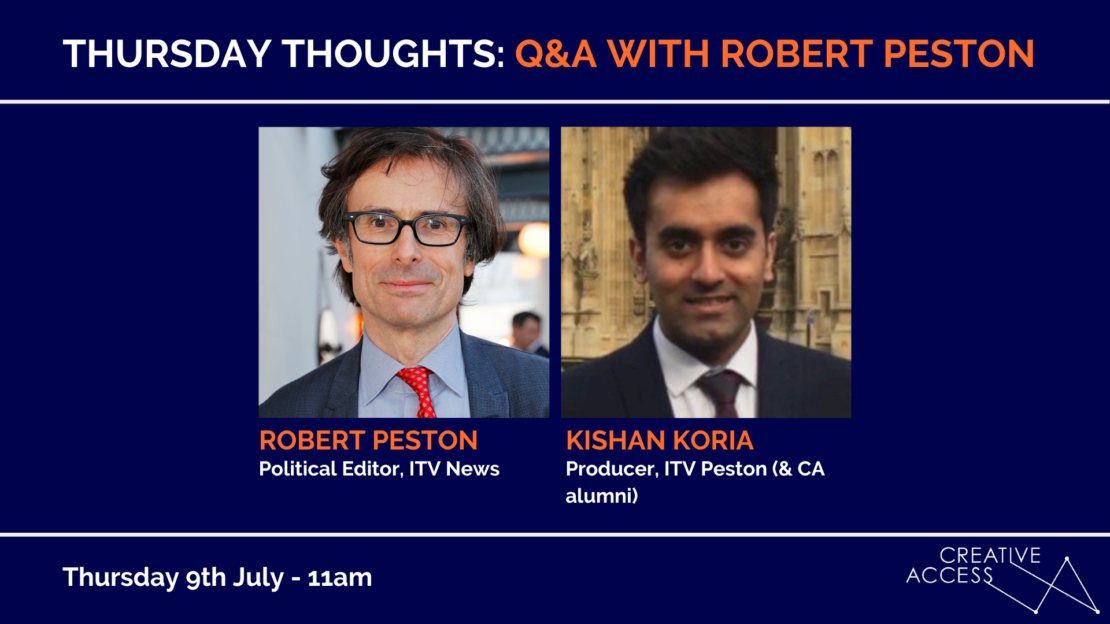 “Where you come from shouldn’t be a factor. Fairness is desperately important” says Robert Peston

For this week’s Thursday Thoughts session, we were joined for an honest and thought-provoking conversation with Robert Peston and Kishan Koria.

Robert Peston is ITV News’ political editor and presenter of the politics show Peston. A journalist, presenter and writer, he has published four books and won over thirty awards for his journalism, including Journalist of the Year and Scoop of the Year from the Royal Television Society. As part of his work making the creative industries more accessible, Robert has worked with Creative Access for years and has also founded the charity Speakers for Schools, helping young people access opportunities through inspiring school talks and work experience.

Kishan is a producer on Peston. He first began there as a Production intern through Creative Access after graduating from the Centre for Journalism with an MA in Multimedia Journalism. Four years later, Kishan is now a Producer on the show. In his new role, he revealed that he now has more input on “what the news is, who the best guests would be and what are the issues people want to hear discussed. It’s a great job.”

Kicking off the discussion, Kishan had lots of great advice for those starting out in the industry. He explained that “the first job is the hardest job to get, I was lucky in the sense that Creative Access fulfilled that for me … If you’re struggling to get your first job don’t worry, once you’ve got there, all you have to do is be good, be keen and get stuck in, then actually you find the industry is a lot easier to navigate than you think it is.”

If there’s something that you really love and you enjoy doing, then you don’t have to make an effort to be enthusiastic about it

When Josie asked, “Do you think it matters if that first job isn’t your dream role? Can you find your journey once you’re in?” Kishan answered, “You meet people all over the industry as soon as you’re in. No matter what show you’re doing, you’ll make contacts. They become your friends and you can get an idea on what their job is like and before you know it you could be working with them.” He also emphasised that “the thing that’s been most useful for me is that I really love what we cover … If there’s something that you really love and you enjoy doing, then you don’t have to make an effort to be enthusiastic about it because it’s just what you want

He reflected on the best and worst parts of his role, including bumping his head during an interview with Michael Fallon MP and being frustrated by politicians who refuse to answer this questions.

When reflecting on reporting on the current pandemic, Robert also shared: “The last few months have been exhausting, but I’m bloody lucky to do what I do … Trying to make sense of it is fascinating.”

He spoke about the challenges of starting a career during a pandemic, with Robert reassuring the audience that “when everyone else is scared, that’s the moment to build. It’s a lesson for all of us as individuals; stand your ground and you’ll get noticed.”

When Kishan asked how he started out in the industry, Robert explained that he “did the odd bits and pieces for our school newspaper and uni magazine but there genuinely wasn’t a big plan to be a journalist … though after some work experience I realised I didn’t want to do anything else.” He also pointed towards the opportunity in creating your own content: “The great thing about doing news or creative stuff in the media is that … there’s an enormous amount you can do on your own with technology to improve your skills. It was one of the things that didn’t exist at all when I started out, the ability to self-publish blogs, videos, audio or podcasts … I’m not trying to minimise the challenges but there are amazing opportunities for young people.”

“Fairness is desperately important, and we’re a long away from having a society that is fair.”

When the conversation then turned to his work with Creative Access, Robert answered, “As a matter of principle, I’ve devoted a bi

g chunk of my life to a particular form of encouraging opportunity … Anything I can do to help any talented person get on, on the basis of merit. Background shouldn’t be a factor, where you come from shouldn’t be a factor. Fairness is desperately important, and we’re a long away from having a society that is fair.”

When Kishan said he was grateful to Creative Access for joining his show, Peston told him that, “you’re an absolute foundation of the show, just to be absolutely clear, we’re not taking people who are less talented. Kish is one of the most talented people I’ve ever worked with. All we’re doing is making sure we’re seeing the world properly and seeing talent where it really is.”

With huge thanks to Robert and Kishan for their time and wise words.

You can view the whole conversation on our YouTube channel here.