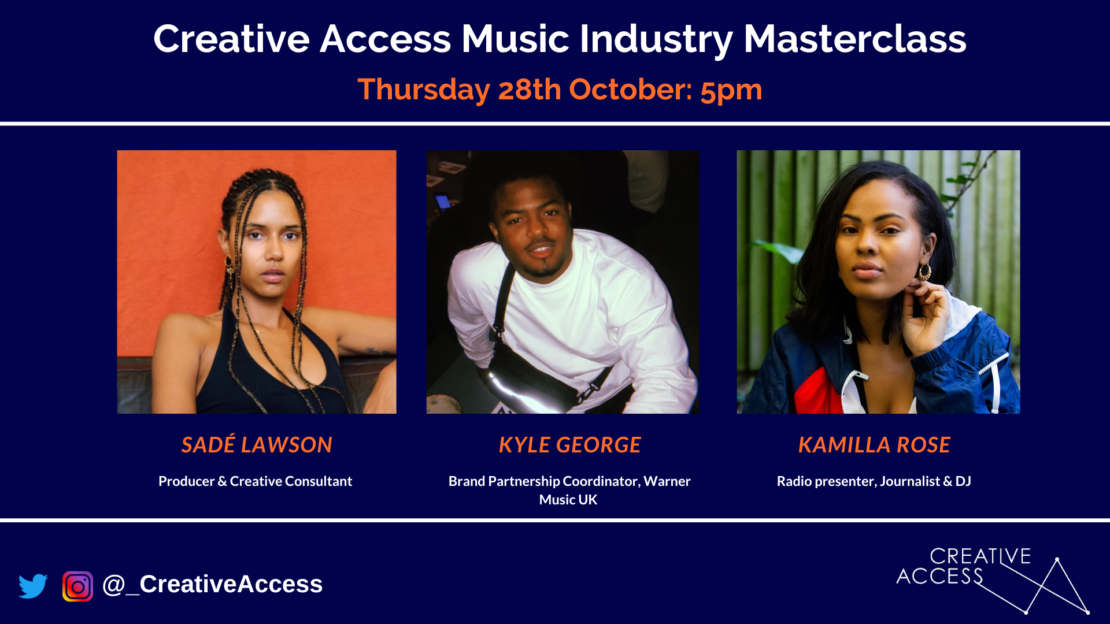 For our October Masterclass, we were proud to host three of our Creative Access alumni who delivered an exciting and insightful session discussing their careers so far in the music industry, their advice on how to stand out and how to make connections.

Our chair Kyle George is a Brand Partnerships Co-ordinator at Warner Music UK, connecting brands like 1800 Tequila with artists such as Ed Sheeran and Kojey Radical. Having studied Law at the University of Southampton, Kyle wasn’t aware of the different roles within the music industry – such as brand partnerships – but used his transferable skills to get an internship at Warner Music through Creative Access in 2018. He has stayed there ever since.

Kyle was joined by radio presenter, journalist and DJ Kamilla Rose. Kamilla was one of the firstinterns we ever placed in 2012, with TV production company TwoFour where she learnt the “inner workings of a media company”. However, unsatisfied creatively working in “corporate” TV production, Kamilla successfully moved into music. She volunteered at community stations such as Reprezent Radio and Foundation FM and began blogging and interviewing artists on her own account. She then got a paid position at BBC 1Xtra and now hosts a show on Capital and has begun to work in audio production. In 2019, Kamilla was awarded the prestigious Radio Academy’s ‘30 Under 30’.

Sadé Lawson is a Producer and Creative Consultant, whom we placed with Sony in 2013. Hailing from Scotland, Sadé did unpaid internships throughout university and struggled to find paid work when she moved down to London. She praised Creative Access as the “turning point” for helping her access her first “industry job” which allowed her to get her foot in the door. Throughout her time at Sony and later as a Product Manager at Warner, Sadé had side-gigs such as running events, DJing, forming networks with other creatives and starting up her own production company – COZY – with a friend. She is now freelance and has worked within artist management on the likes of FKA Twigs’ album Magdalene.

“Put yourself out there as much as possible” – Kyle

Much of Sadé’s experience in the industry came from her creative projects outside her jobs at record labels, emphasising that these became the things which people began to approach her for. She said: “These things help you stand out because you have lots of different facets to what you do.” Kamilla echoed this sentiment as she didn’t have one “set first job in music”. She explained that whilst volunteering at community radio stations like Reprezent, she was able to gain an insight into the music industry that she wasn’t possible in her corporate TV production job. Through this, she honed her presenting style enabling her to get presenting gigs at BBC 1Xtra and now, Capital. Both Sadé and Kamilla demonstrated that if you are a creative person, you have to throw yourself into a variety of different projects in order to learn.

Importantly, all three of our alumni recognise the difficulties that come with balancing a career and gaining work experience in the creative industries with the realities of living costs. Sadé knows how “lonely” this experience can be for people trying to break into the industry, especially those coming from outside London with no connections in the city. Kyle, Kamilla and Sadé all recommend planning and to keep reminding yourself that the hard work will benefit your career in a few years.

“Keep lines of dialogue open and be intentional with it” – Kamilla

A way of breaking down these barriers though, for Sadé, was making connections with her peers working in music. Similarly, when Kyle asked the panel how people can stand out, Kamilla stated that networking is one of the most important things in the industry. She stressed that it was essential to gain the details of all those you work with because without these lines of communications, you might miss out on opportunities for which you are a perfect fit.

“It’s all about building the networks, as well as having the educational background and the skills to do something” – Sadé

These insightful words are especially true if you are freelance. One fantastic example of the importance of networking and getting to know people within the industry was Sadé’s story of how she came to work with FKA Twig’s management team. Sadé explained that she ended up having a job in the same office as them and having been around them and understanding their processes, when she got the role with the team, was able to integrate into it easily. She emphasised the importance of a management team understanding the artist’s vision, but also how her previous label experience gave her perspective executing the project keeping the label in mind as well as the management and the artist.

Kyle, who has never been freelance, gave a different perspective. He explained that despite not having a creative background, he took what he could from his degree to make himself stand out. In his applications for music jobs, he spoke about intellectual property, copyright and trademark laws to show his transferable skills for the roles. He advised that:

“On your CV, hone in on something that’s very particular to you, even if you don’t think it’s relevant – you can make anything relevant”

All three of our alumni encouraged the audience to be open to opportunities, with Kyle urging them to “Apply for everything!”. Sadé and Kamilla also advised people to try different things outside their comfort zone. Alongside this, the panel recommended researching the companies and people that you want to work with and connecting with creatives who are both your peers as well as those who are senior to you. Kamilla was an advocate for harnessing the power of LinkedIn, suggesting people to drop someone a message and say, “hey, can we go for a coffee?”.

In regards to their hopes for the future of the industry, Sadé said that because of the pandemic, she is now able to work with creatives remotely. She hopes that if the pandemic has changed things for the better, it will be so that people will have the chance to make networks across the world. All three of our alumni highlighted their hopes for more representation within the music industry, with Sadé looking forward to it becoming more accessible for young creatives who are from outside London, or who don’t come from monied backgrounds. Kyle’s hopes also arose from his experiences working within a label, making the point that “initially it felt like all they wanted to hear from Black people was about hip-hop. It feels like that’s all we can contribute, when there’s loads of people making rock, house, pop, all sorts of stuff. That has to change…”. Meanwhile, Kamilla’s hopes focus on those working behind-the-scenes in music and she has a network called the Bring In which aims to equip the next generation with the networks and skills for the music industry. She told the audience that she was looking forward to seeing more diversity in senior positions.

It was inspirational to have our alumni Kyle, Kamilla and Sadé speak to the Creative Access community about their journeys in the industry, proving that despite the barriers that make the industry sometimes seem inaccessible, getting started in music, forming valuable networks and moving into more senior positions is achievable. So, if you are interested in taking up the challenge to break down barriers and realise your own hopes and aspirations by choosing a career in music, make sure that you check out the current opportunities on Creative Access.

Watch the session in full on our YouTube channel here.