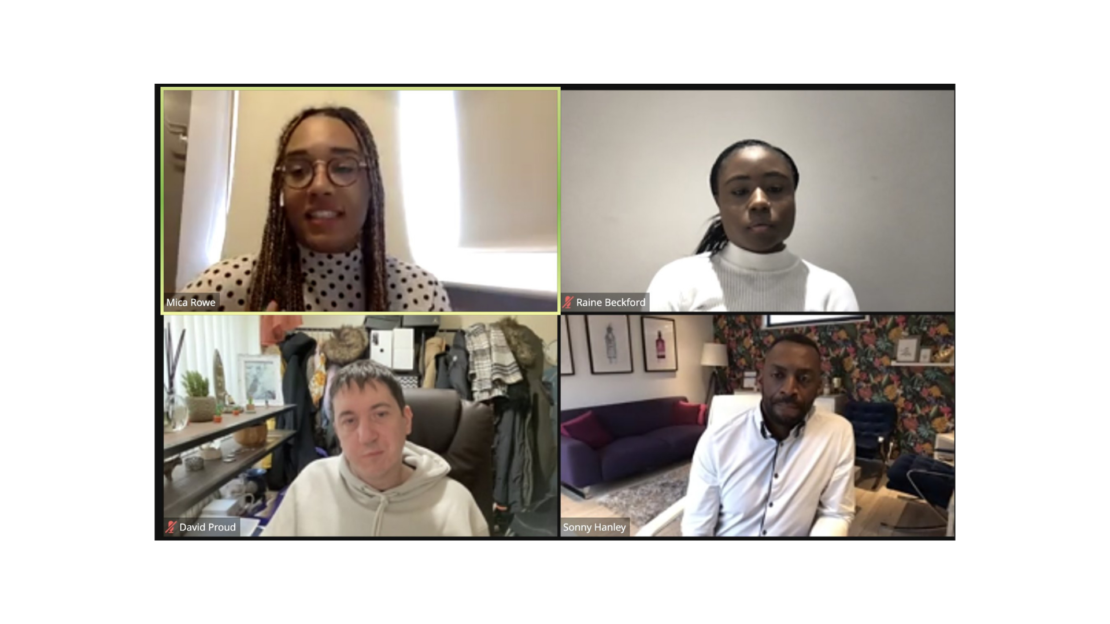 Four creative professionals working for ITV came together to share their journeys through the television industry and their top tips on how to make yourself stand out from the rest in our September masterclass.

The Creative Access community joined to watch Creative Access alumni, Raine Beckford and Mica Rowe, talk with Sonny Hanley, and David Proud to discuss the on and off-screen truths about the industry.

The television industry is often perceived as hard to access, with many of our community uncertain on how to make the first steps to a role in TV. Creative Access, with our mission to give people from under-represented communities access to TV and other creative industries, assembled a panel of pros working in areas from content distribution to script writing, producing and acting, to explore not only how to make it into the industry, but how to get noticed and be remembered and the future of television itself.

Sonny Hanley, Controller of Content Services, spoke of a strong desire to work for ITV that revealed itself at a young age. Passing the building with his mother, he was confident that one day he too would work there. Sonny, taken with the mechanics of television as a young boy, now sits proudly at the helm of ITV’s distribution of its most well-known and well-loved programmes. For Sonny, persistence was key as he told our viewers of his experience of asking for work and being rejected but having the tenacity to ask again – this time being invited to spend a few weeks at the ITV studios to make a documentary. Sonny used this vital opportunity to make contacts and learn as much as he could – and has now been working for ITV for 18 years.

“I used the time to create contacts while there, that kickstarted when a vacancy came up, I was able to get back there once I finished university” Sonny Hanley

For others, this journey is not so linear. Our host Raine Beckford, who is now a researcher on Piers Morgan’s Life Stories and Mica Rowe, now Assistant Producer on Loose Women, both shared their feelings of being lost and unsure what to do next in their careers. Raine left university with an economics degree, but after thinking about what she enjoyed doing, decided to pursue a career within media, later getting a Creative Access internship with Peston as a runner.

Like Raine, Mica is also Creative Access alum. “I was always interested in stories and speaking to people” Mica said as she spoke of her first job on an antiques show and stressed the importance of a strong work ethic, as working-class woman of colour with no prior contacts in the industry. She is proof that it is possible.

When asked about specific tips our Creative Access community could use to improve their networking skills, David Proud, writer of Coronation Street and proud owner of a new puppy, Alfie (whose cute barks could be heard throughout!) had lots to share.

He spoke of how essential it is to not only network with those above you, but with your peers, as they will be the reinforcement you need to keep going sometimes. Sonny and Mica agreed, both saying how important it is to form connections. “Networking sounds like a dirty word, but because everyone is in it…it’s not so bad!” Sonny added. All members of the panel emphasised getting out there, meeting people and pushing yourself outside your comfort zone, to eventually reap the rewards. David said:

“I’ve never got a job from a conversation I’ve had at a party. It’s important to find your support network. Don’t look for the person who might employ you but the person who you might create something with. Find your allies.”

Mica commented on the importance of keeping your CV up to date, as well as making yourself known to the talent managers of various TV companies to make sure you stay on their radars. Creative Access also runs regular CV consultation clinics, specifically created for those wanting to get into television/film, don’t forget to sign up here if you’re interested!

Networking can also help with getting your work looked at, with David’s advice being to find an agent, as well as sharing your work at script festivals, new writers’ avenues and writing spec scripts – but foremost finding your agent as negotiating can be intimidating!

Being genuine and helpful is also vital, as Sonny said:

“If you show people you’re a nice person, they’re going to remember you and bring you onto the next project.”

Being freelance can also be intimidating in nature, the panel revealed. With the changing

dynamic of the world, more and more individuals in the television industry have decided that freelance working is their new norm. Mica, who has had the best of both worlds, commented that although being staff allows you to climb up the ladder, sometimes freelance work can lead to more naturally organic connections with people. David had quit a full-time job to pursue a career as an actor at the beginning of his career, unsure of what the future might hold. Freelance is scary, but if we’ve learnt anything, it’s that sometimes it’s worth taking the risk as it can be “both terrifying and exciting” he said.

The past two years have shown just how adaptable the creative industries can be, and this definitely includes the television sector. ITV has had to be more flexible and innovative when building a rapport not only with their audience but with the guests on their various shows. Mica spoke about “thinking outside the box”, especially when it came to building those vital relationships. Things are slowly making their way back to a new kind of normal, as David tells us about writing for running drama, Coronation Street:

“I had to make a note of every time someone touched anything in the script. It’s really hard to show human empathy from 2 metres apart. It is kind of getting back to normal now.”

ITV pulled together during the Pandemic, and although challenging, it was made easier as everyone had one common goal – to produce and distribute amazing television.

Raine wrapped up our Masterclass by asking for any special guidance on applications. Mica shared how essential it is to make your CV easy to read, avoiding huge blocks of text. Many members of our panel revealed they go through hundreds of CV sometimes, so format definitely matters. Sonny added the strength of a well thought-out, passionate cover letter, with David adding the importance of being honest about your shortcomings, but a willingness and drive to learn and be more. Sometimes it can feel like the odds are stacked against you, but as David said, “don’t let them win…don’t give up!”.

We are very grateful to Sonny, Mica, David and Raine for sharing their time and experiences with us. If you are interested in a career in television, don’t forget to check out our current opportunities. We also thank all those who attended and contributed to the discussion by asking questions to our panel.

Watch the session in full on our YouTube channel here.