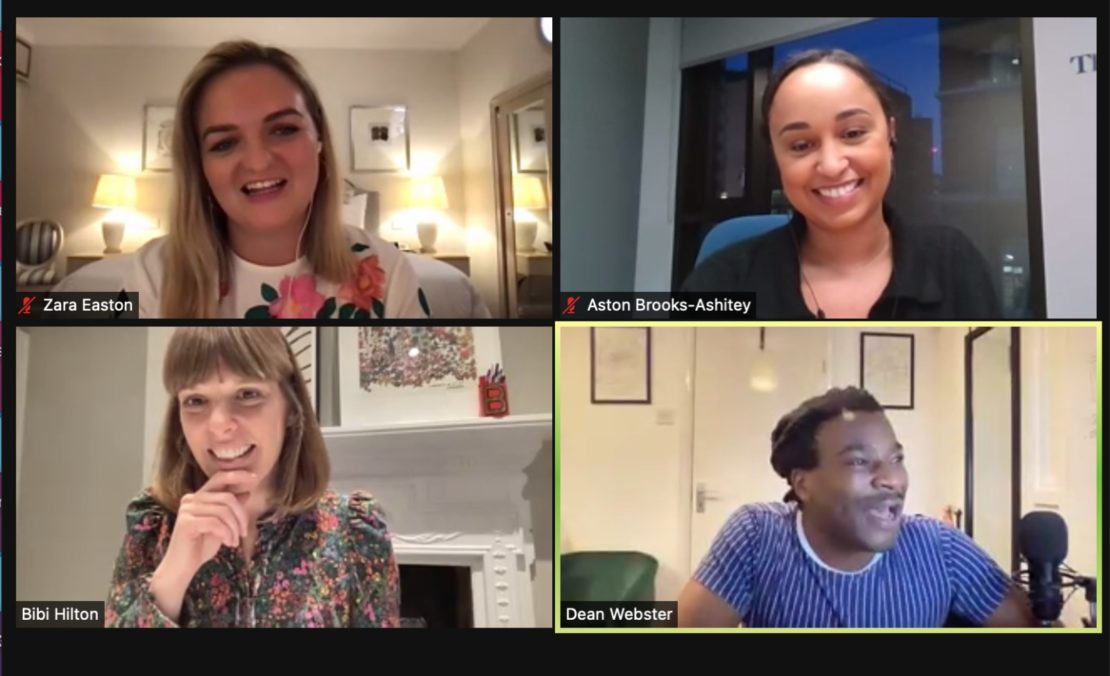 “Have fun with it!” – How to take the cringe out of networking with LinkedIn’s Zara Easton, Aston Brooks-Ashitey and CA Alum, Dean Webster

We recently asked our community how important they thought networking was for a successful career in the creative industries. Over 97% agreed that it was vital, however87% admitted that they found networking difficult. Despite networking helping us move up the career ladder, many people find making connections with strangers cringey or awkward, and it’s often seen as something that happens within privileged circles. However, as our latest masterclass shows, networking can work for everyone – no matter their background or where they are in their career!

Dean kicked off the masterclass by emphasising how important networking is in the TV world, where most people are freelance. He explained that events such as Royal Television Society Futures can be a great way to mix with both your peers and those high up in the industry. He once met the creator of the Million Pound Drop at an event and simply started the conversation with: “How did you come up with the idea?”. He recommends that anyone in the creative industries does their research prior to networking events on who’s going to be there and read industry trades so that you have relevant news to discuss. Our other panellists echoed this sentiment, agreeing that researching the person you want to reach out and thinking about what can be gained from the connection is vital. Why them? What about their career do you admire? And, fundamentally, what do you want from the exchange? Be it mentoring, career advice or simply widening your network, it’s important to have a beginning, a middle and an end in mind when having a conversation.

“Always be open and honest about what you want”

As Aston stated, networking doesn’t always have to be about looking for a job. Sometimes, you might gain a great friend or mentor out of it, or a job may come, but perhaps later on down the line when you don’t expect it. She explained that networking at its core is about “building connections”, but you shouldn’t be knocked back if someone doesn’t respond. Bibi reassured the audience that most people in senior positions are happy to help, she recommended asking for 10-minutes to pick someone’s brain – a quick exchange, without pressure, is something that most people can make the time for, even if they’re busy. Although you should always respect people’s boundaries and be thoughtful when reaching out, as Dean says, you have to be aware of “what’s in that person’s control”. Zara suggests waiting a few weeks to chase someone up if they’ve not responded to you, rather than sending a barrage of emails in quick succession.

The creative industries is a small world and Dean made a great point that networking doesn’t have to mean ‘networking up’. It’s just as important to ‘network sideways’ with your peers. He said that building up a network of your industry contemporaries is where “true moments of creative flair can spark”. When he has recruited for TV work, Dean has often thought of people who he’s met at networking events in the past and got in touch with them, proving the power of ‘networking sideways’. Dean is such a fan of networking and an advocate of its power that he came up with his ‘3 Ps of Networking’ on the spot during the discussion! He stated:

Prepare – know what you want from the exchange and research

Practice makes perfect – keep networking, even if it feels unnatural, eventually it will get easier!

Patience – have patience with people and their responses

Although networking may seem like a skill that only confident people can practice, Zara reminded the audience that even if you’re more introverted, there are forms of networking that can work for you. She recommended that people take it slowly and make it as easy as possible for themselves, explaining that making online connections through platforms like LinkedIn can take the anxiety out of these interactions.

“Your profile is essentially your digital business card”

On the power of LinkedIn, we were lucky enough to receive a whistle-stop tour on how to ‘Rock Your Profile’ by Zara and Aston. During the pandemic much of networking moved online and it has shown that location doesn’t have to be an issue if you’re looking to put yourself out there. Zara’s key advice was to customise each LinkedIn request you send; if you explain to people why you want to connect with them, they’re more likely to respond. Similarly, their top tips for optimising your LinkedIn profile were:

“Ask for advice – people love to give advice!”

The main sentiment from the evening’s discussion was that networking doesn’t have to be scary, it can be a relaxed and positive way of making connections with likeminded people in your field. It’s also important to bear in mind that we all get nervous; whether someone is a CEO or hasn’t entered the world of work yet, everyone suffers with some level of imposter syndrome. Our panellists assured the audience that you can’t let this fear stop you from trying thing. They encouraged our audience to remember that ultimately networking is just having a conversation with another person. Ending with her favourite piece of networking advice, Zara quoted the Squiggly Careers Podcast’s explanation of networking as “people helping other people”.

All our panellists agreed that their favourite thing about networking is the ‘weird and wonderful’ opportunities it can bring. The truth is, most people are happy to help and most people enjoy telling their stories, as well as hearing other yours. As Aston highlighted: “Everyone has something to offer”. So, remind yourself of this the next time you feel nervous about striking up a conversation with someone at an industry event or sending out that LinkedIn request – you never know what the connection might bring.

Thank you to our fantastic panel, and of course everyone who came along and asked such insightful questions. If you missed the masterclass, you can watch it in full below.

Make sure you join our next masterclass with our friends at McLaren Racing, who will give the lowdown on the many creative careers on offer at McLaren. Keep an eye on our events page for more sign up details.

Some helpful tools on amplifying your career:

o    Jobseeker checklist – to help people create a LinkedIn profile, network and search for a job

o    How to amplify your profile on LinkedIn – online learning video