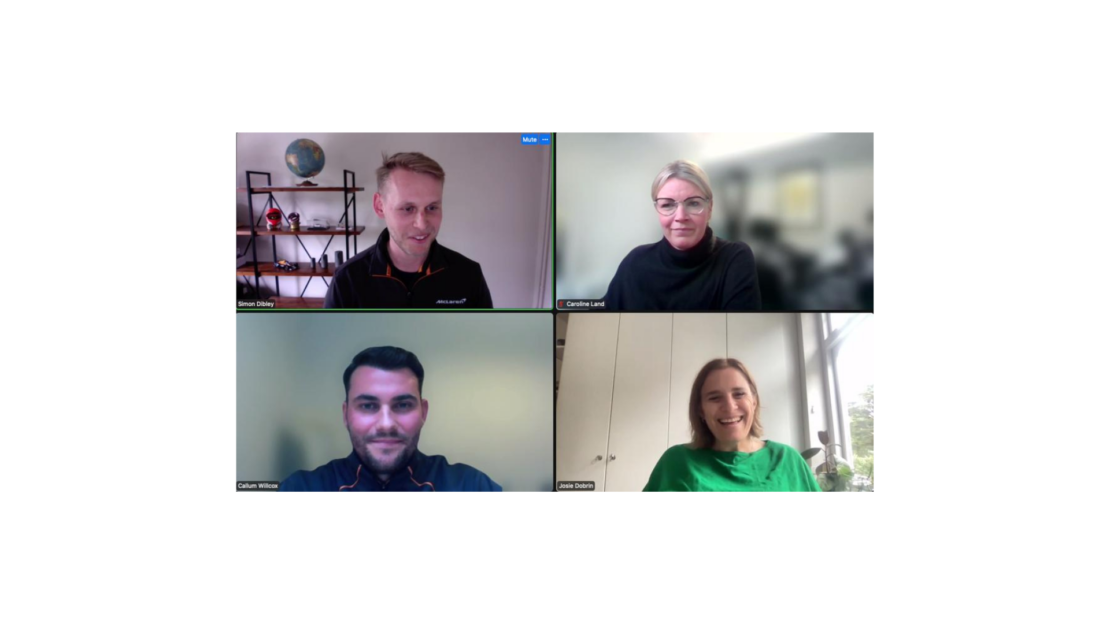 For our April Creative Access masterclass, we were lucky enough to be joined by our friends at McLaren Racing to learn about the huge array of different careers within marketing, branding and design.

Creative Access and McLaren Racing have been partners since June 2021 when we joined the McLaren Racing Engage Alliance, which aims to diversify talent in motorsport. Last autumn we launched our first Career Development Bursary together to provide funding to help people overcome the financial obstacles to career progression.

We’re now excited to announce three, month-long paid internships at McLaren Racing this summer. Keep on eye on our website and social media in the coming weeks for more details to follow…

We were curious to know how our panel got started in their careers at McLaren Racing. Kicking us off was Simon. His design team covers everything from car livery to 3D animation and everything in between. Originally from New Zealand, Simon had studied design at university and told a careers advisor he would love to design cars. However, he was told to pick something “realistic” and cast his dreams of designing F1 cars aside whilst looking for other jobs in the design field. Although he didn’t have much experience in the industry, he passed his CV around and began to work at an agency which ended up working on a project with McLaren Racing and the rest is history!

Caroline oversees the creation of everything from merchandise, such as T-shirts and hoodies, to NFTs. She had started off in fashion merchandising working for British retail brands, specifically in menswear. However, Caroline quickly grew bored and realised she wanted to keep working in products, but in a new area. After working on the London 2012 Olympics, she began working for Puma where she started to work in sports licensing such as with football teams and F1, giving her the experience she needed to join McLaren Racing.

Callum’s role focuses on partnership development, pulling together pitches to target new partners to sponsor and support the McLaren Racing team. Recent partners to join the team, include Google. After studying economics through which he got a feel for marketing, Callum ended up doing a masters in marketing. He got into McLaren Racing by writing his dissertation on social media activation within sponsorship, which he put on his CV. This caught the eye of a recruiter who wanted to interview him on behalf of McLaren Racing.

Although the perception of F1 is that it’s a ‘man’s world’, Caroline says things have changed over the past 5 years, and that McLaren Racing makes an effort to create an inclusive working environment. Caroline laughs that you do have to do your homework in order “to hold a conversation with the engineers and the mechanics.” However, our panel all emphasised that while having an interest in F1 is helpful, it’s not essential within the creative teams at McLaren Racing. In fact, having a fresh perspective can actually be a real benefit, with Simon adding that not being an avid fan may improve your ability to question the way things are done and improve them. Caroline summed it up:

“We need that new talent coming through who know the trends and what their friends are into, so we can stay relevant. The younger experience is really relevant… We don’t want people who slip into the mould, we want people who bring different views.”

However, Callum warns that once you’re in at McLaren Racing, it’s difficult to not become F1-obssessed!

So, what were our panel’s tips for aspiring marketeers, designers and branding specialists? Simon recommends immersing yourself in your chosen industry. For example, with design, read about industry trends, search out award-winning agencies or new agencies popping up, listen to podcasts featuring designers you admire – essentially learn as much as you can so you’re ready to tackle whatever jobs come your way. As he explained, he had no prior experience in the creative industries, just a passion and drive which helped him land his dream job. Caroline adds that it’s important to form your own opinion and states: “Don’t be shy!”.

Marketing as a department encompasses so many different roles, as depicted in the diversity of roles within our panel. However, whichever niche you find yourself in in the industry, it’s vital to keep up with trends. Callum recommends reading trade press like Marketing Week and Campaign. He also explains that working for a big organisation like McLaren offers lots of progression, so if you find yourself gravitating to a different part of the marketing world, there’s room to explore that. Caroline continues that there is constant communication between the different teams within the department for each project.

Similarly, marketing is all about knowing your audience and how you can reach out to them, whilst also reaching an audience who might not be aware of you yet. And in line with this, our panel all emphasised the importance of listening to McLaren’s fanbase. Callum explained, they host fan surveys asking about everything from merchandise to partnerships and that the marketing team go down to the track and ask fans questions directly such as ‘What can we do better?’ or ‘What do you like?’ He states: “Fans do make a difference!” Even when deciding which other brands to partner with, they keep the fans front of mind.

Our panel finished by reminding the audience that working in Formula 1 isn’t ‘stuffy’ or ‘mechanically-focused’ – it’s so much more than that as a brand and there is a lot of scope for creativity. Caroline came back to the idea that it’s important to have people come in and ‘shake things up’. She said, at entry level, there are so many opportunities to be a sponge and suck up knowledge and work out where your passion lies. Caroline stated: “Sports marketing isn’t 9-5 so you really need a passion for it, but it’s an amazing job.” Chiming in with this, Simon said the most challenging part of his role is also his favourite: the fast-natured pace of the sport itself. While Callum advised:

“Don’t be afraid to throw yourself into everything. If you genuinely love working in marketing, it makes your days much easier. Don’t commit to something if you don’t love what you’re doing on a day-to-day basis”.

A massive thank you to both our panel and audience for joining us! You can watch the masterclass in full here. To coincide with Mental Health Awareness Week, our next masterclass on 11th May will be focusing on mental health and wellbeing in the creative industries. Sign up to join here.