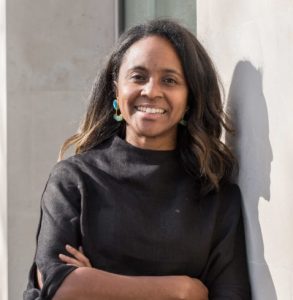 We were proud to host a Masterclass with our very own April Brown chairing a conversation with curator and Director of The Chisenhale Gallery, Dr Zoé Whitley. Both April and Zoé have extensive experience in the arts and shared their insights into breaking into the industry. They emphasised the importance of staying authentic to yourself, discussed their passion of making art accessible to a diverse audience and explained what it means to be a curator.

April Brown is a former Creative Access intern, turned Creative Access member of staff. She started her career at LIFT Festival as an Assistant Producer 7 years ago and since then she has continued working in arts and youth engagement at organisations including Somerset House and Tate. She has over 10 years’ experience in developing cultural programmes for young and diverse audiences and now works as Programmes Coordinator at Creative Access.

Dr Zoé Whitley is a curator – and Board member at Creative Access – who started as an intern at the Los Angeles County Museum of Art. She is director of the Chisenhale Gallery in East London; a charity which both commissions art and works to develop projects and relationships with the local community. Zoé has a distinguished background in the arts, having worked in curatorial roles at the V&A, the Hayward Gallery and Tate. She has curated notable exhibitions such as the ground-breaking Soul of a Nation at Tate and the British Pavilion at the Venice Biennale.

April and Zoé both spoke about not seeing themselves in museum and gallery spaces; not being sure that they ‘belonged’. Despite having worked at the V&A for years, Zoé only had the confidence to apply for a curator role at the Tate because it was part-time: “Whatever I thought of as a curator at Tate, I didn’t think it could be me.” Similarly, April stated how she had to do many years of unpaid work whilst trying to break through and was ‘overjoyed’ to be placed by Creative Access at LIFT. She explained that she felt the same as Zoé when she began to work at Tate:

Despite this lack of self-belief at the beginning of her career, Zoé stressed the importance of finding a supportive network that can be trusted to give constructive criticism. When April questioned how Zoé progressed into these leadership roles, she explained that as a Black woman in the arts, having experienced the inter-section of sexism and racism, she never aspired to be leading those institutions. Yet, it got to the point where artists specifically wanted to work with her.

Zoé’s definition of what it means to be a curator goes back to the root of the word: to care. Ultimately, she said, it’s about channelling knowledge into something people can access. She continued that it’s about wanting to be a conduit so that the artwork connects to the audience in the right way

Both Zoé and April wanted to emphasise how their roles facilitated a connection between the audience and the art, explaining that the reason why an exhibition exists is because you want to connect with the audience. Zoé spoke of her desire to make the artist feel happy. She works to prioritise their needs and respect the context of their art. This inclusive approach paid off particularly in the exhibition Soul of a Nation at Tate. “We did right by every artist in the show”, she said, and importantly through this, it connected with the audience.

April and Zoé then discussed what makes a good leader. Zoé made it clear that:

“You don’t have to lead by elbowing your way to the front… I hope this shows future leaders, there are other ways to be a good leader”

She then stressed the importance of staying authentic to yourself whilst in a role at a big organisation and the value of holding onto your emotional and intellectual curiosity. Zoé emphasised that young people wanting to get into curation should recognise their own power: “I don’t want anyone to talk themselves out of it”.

When questioned on their tips for breaking into the industry, Zoé drew attention to the need to harness your interests and to enhance your skills outside ‘work’, such as starting a zine or an Instagram page, or writing about your interests. Zoé explained that there wasn’t a job she spoke about that she got the first-time round. Likewise, April stated it was her DIY work that was crucial in securing her paid roles in the sector. With this understanding, April recommended recognising the requirements of the role, such as that of a curator, and working out ways to gain those skills without actually being a curator. Zoé encouraged the audience:

Both speakers brought to the fore the importance of self-belief and urged people to recognise that they can be there, even if they don’t see themselves in museum and gallery spaces. Their strong message is: don’t be disheartened by rejection, keep finding innovative ways to put yourself out there and develop your passion.

A huge thanks to Zoé for her inspiring and wise words and to April for being a fabulous masterclass host.

You can watch the session in full here.