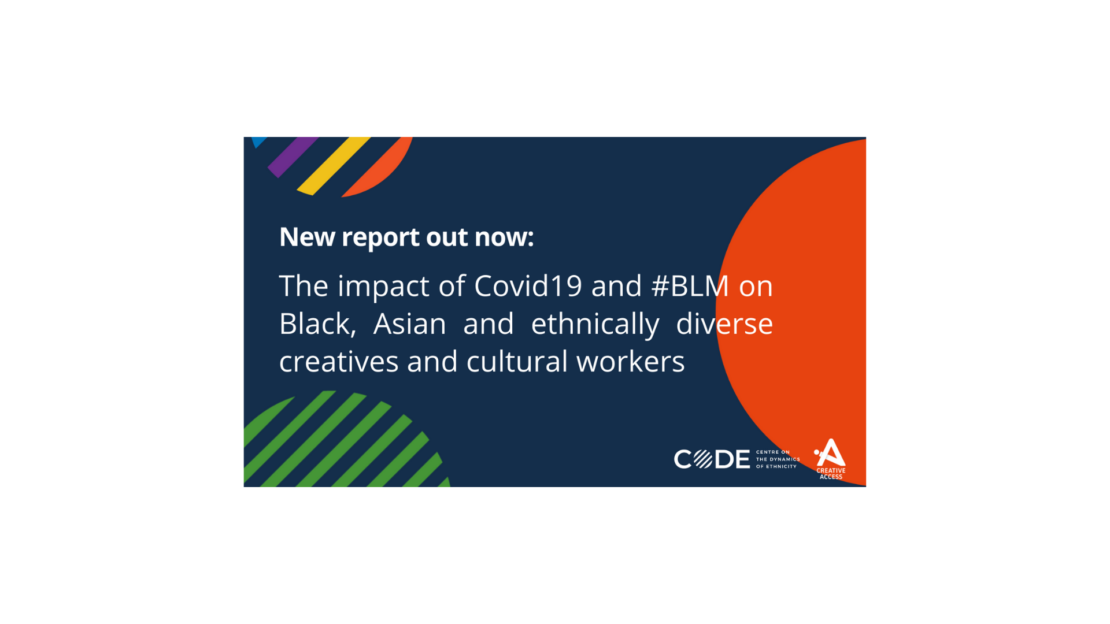 Covid pandemic has worsened pre-existing inequalities in the creative industries

The pandemic has worsened pre-existing inequalities in the creative and cultural industries by causing job insecurity and financial instability among ethnically diverse people employed in the sector, according to a new report. This is particularly concerning given the underrepresentation of these groups within the industries.

Experts from The University of Manchester’s Centre on Dynamics of Ethnicity partnered with career support organisation Creative Access to collect data on the experiences of ethnically diverse workers – and those aspiring to work – in the industries.

The researchers found that only 29% of respondents were in employment a year after the first lockdowns – a huge drop of 22 percentage points – and 48% of respondents said they are either becoming financially unstable or need immediate assistance to pay their bills.

The overwhelming majority of ethnically diverse creative workers report feeling anxious or worried, with insecurity being a major contributing factor – 70% of all respondents were worried about their job security, and a staggering 89% of workers with over 10 years of experience said the pandemic had made their job less secure.

One respondent told the researchers that they were unable to claim money from the SEISS [Self-Employment Income Support Scheme] despite having no income – they were existing on Universal Credit, which was barely enough to cover their outgoings. They said their mental health had plummeted from not being able to secure any kind of work.

58% of respondents said that their primary source of income had changed, and alarmingly, 30% of these said they had left the creative and cultural industries for another sector – this suggests a risk that as the industry recovers from the aftermath of the pandemic, it may be even less diverse than before.

37% of respondents said their careers had been affected by discrimination because of their ethnic or racial identity, but many reported that 2020’s Black Lives Matter protests had only seen limited subsequent improvements despite many employers declaring their intent to reduce discrimination and increase diversity. Only 14% agreed that more paid opportunities were available as a result of the protests, and these were also likely to be junior positions.

The report’s authors are calling for a host of changes at creative and cultural organisations to tackle these issues including the adoption of employment targets, guidelines for recruitment practices and financial incentives for organisations which develop targeted schemes for graduates from ethnically diverse backgrounds who have lost out as a result of the pandemic.

“Our findings are extremely worrying because they demonstrate that ethnically diverse creatives and cultural workers are having to deal with the severe impact of Covid on employment in the creative and cultural industries, on top of pre-existing racism, and indicates a potentially lost generation of ethnically diverse talent who are struggling to enter the sector,” said Roaa Ali from the Centre on Dynamics of Ethnicity. “We believe that the pandemic has significantly compounded issues of ethnic and racial inequality in the sector, and we are calling for urgent and specific actions championed by both industry and policy decision makers to address this – this, too, is integral to the levelling up agenda.”

“The creative and cultural industries were already the site of fundamental race and ethnic inequalities, and our findings suggest that the pandemic has deepened them,” said Professor Bridget Byrne from the Centre on Dynamics of Ethnicity. “This sector is critical not only for its contribution to the economy, but also because it shapes the cultural life of the country – this is why structural racism faced within the sector is so concerning.”

“We need action within individual organisations, but also more broadly at a policy level to both collect the data needed to track ethnic inequalities and also to implement proactive actions to ensure that ethnically diverse people have fair access to training, jobs and promotion within the sector.”

“Clearly, the Covid pandemic hit everyone who works in creative and cultural industries – but it also exasperated existing inequalities in this sector,” said Dr Anamik Saha from the Centre on Dynamics of Ethnicity and Goldsmiths, University of London. “While media and cultural organisations were quick to pronounce their support for the Black Lives Matter protests that occurred during the pandemic, our research found this translated into relatively few new opportunities for Black people in particular.”

“Our hope is that in shining a light on their circumstances, media and cultural organisations can better support creative workers from minoritised communities, ensuring fair and equal treatment during these difficult times.”

“On the second anniversary of the pandemic, we are seeing yet further proof of the disproportionate impact of covid on people from groups under-represented in the creative industries in terms of ethnicity. With the huge loss of funding, income and job opportunities in the sector, it’s critical that organisations like ours work with employer partners to ensure that people from these communities do not lose out on career access or progression as a result,” says Josie Dobrin, founder and CEO, Creative Access.