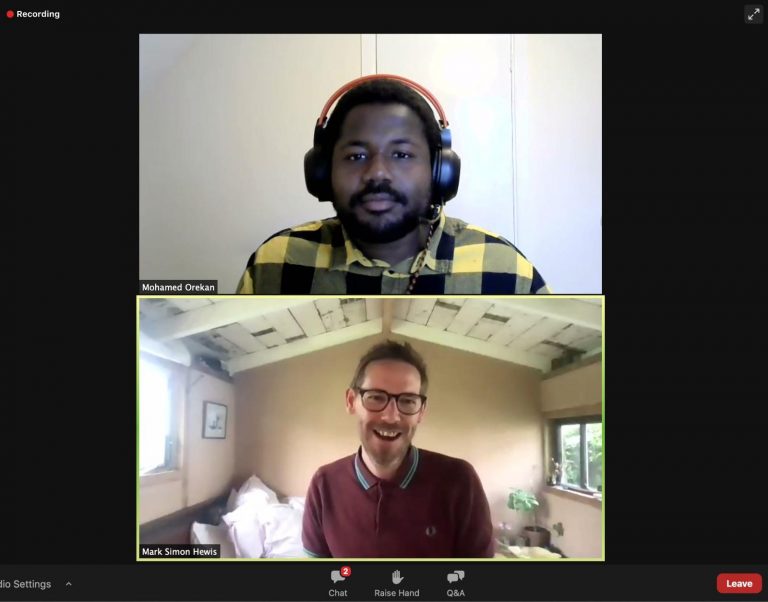 We were delighted to be joined by Mark Simon Hewis from the world-famous, four-time Academy Award-winning animators, Aardman Animations in a Masterclass chaired by former CA alumnus Mohamed Orekan, now at Lighthouse Films. Their illuminating conversation spanned from discussing their respective careers, and advice on breaking into animation to how the industry is adapting to become more accessible and diverse.

Mark Simon HewisMark Simon Hewis is Head of Aardman Academy. He spoke about his upbringing in a small, northern working-class farming village, his struggles with dyslexia, his ambitions to becoming a filmmaker. He was the first in his family to go to university before moving to Bristol where he began to work at Aardman Studios, the home of iconic character such as Wallace & Gromit, Morph, and Shaun the Sheep.

“Starting out from knowing nothing about this world to then heading a department is truly exciting… and scary!”

Mohamed Orekan is a Senior Animator at Lighthouse Studios. He secured his first role via Creative Access as intern at Illuminated Films back in 2014. He then moved on toMohamed Orekan Blind Pigs, a motion graphics studio. Despite not having previous experience in motion graphics, Mohamed explained he ‘learned on the job’. Now as a Senior Animator, his role involves supporting Junior Animators. Mohamed advised interns to ask as many questions as possible to “learn as much as you can and don’t be shy”. He continued that if you’re willing to learn, people are willing to teach you.

“From the outside in, people perceive that you need to have a whole world of knowledge before you’ve even got into your chosen sector. That just simply isn’t the case.”

Mohamed and Mark both stressed the importance of having confidence in yourself and your abilities. It is completely normal to experience Imposter Syndrome at the beginning of your role, but, as Mark says, “we all feel like that”. He spoke about how he did not know growing up that being a filmmaker, or an animator, was even an option. Continuing that he had undiagnosed dyslexia, Mark felt he could not go down the academic route – which again reflects how the industry has changed since then to become more accessible for those with disabilities.

Your background shouldn’t determine your ability

Both Mark and Mohamed stressed their fundamental beliefs that your background should not affect your ability to get into the industry; in fact, diversity is what is needed in the industry to tell compelling stories and reflect the diversity of different audiences. Mohamed passionately highlighted that:

“The animation industry has changed, and for the better. It’s more diverse and it is being reflected on and off-screen, which is lovely to see. The experiences and cultures will help make more beautiful stories for us all to see.”

Mark assured that there is no ‘one way’ into the industry. Both he and Mohamed shared their thoughts on how the industry has changed rapidly over the past 10-15 years. Mohamed believes it is easier now to break in than it was even when he began his career. He explained that networking before was impossible if you did not know people within the industry to begin with, however now, with the internet, people can share their portfolios and connect with industry professionals with more ease.

They advised listeners not to be intimidated by the tools and software – these are skills which can be (and often are) learnt on the job. Mohamed and Mark agreed that your role as an animator relies on your talent – not the tools you have, which emphasised Mohamed’s earlier point that you pick up these skills as you go. Mark echoed this:

“We all make mistakes and that’s ok. It’s also ok to say that you don’t know what you’re doing.”

Win awards from your bedroom

The conversation then turned to the effects COVID has had on the creative industries and animation in particular. Mark and Mohamed discussed how the animation sector had adapted very well to the pandemic and that – because of working remotely – animation has become accessible to more people.

Mohamed stated that the past year has proved that ‘you can do this from your bedroom’ and still win awards. He hopes that companies see the strides they have made to be more accessible during the pandemic and continue to use that model of working. Both Mohamed and Mark highlighted how exciting the future of animation was because of the increasing accessibility and diversity within the industry.

Similarly, Mark discussed Aardman Academy’s ethos to be as accessible as possible to aspiring animators around the globe. He spoke passionately about Aardman’s goal to nurture talent no matter someone’s circumstances. Far too often there are financial barriers into the industry, but Mark explains that:

“With Creative Access, we are finding ways to fund places within the academy, and we are working with them constantly to make sure people apply and continue making a difference. With them, we are opening the door further for everybody.”

Ultimately, both speakers delivered the message that if you find yourself in a role within the creative industries, such as animation, you have done so because you deserve it and you have a passion for it. Your background and previous experience all feed into the unique perspective that only you can offer your industry. Mohamed and Mark both drew attention to the importance of harnessing your uniqueness and not letting self-doubt get the better of you. You can watch the session in full here…